Cuban crafter Neury Santana Ges is a self-taught artisan. He belongs to the Cuban Association of Artisans and Artists, ACAA. He has won several national and international handicrafts awards, many of his works decorate private collections in different countries around the world. Neury’s works also appear annually in auctions of the Habanos Festival. Auction of the Habanos Humidor took place for the first time in 1994, and has been the most important celebration during the Habanos Festival, the revenue raised during the auction will be all donated to the Ministry of Public Health of Cuba. Neury brings back memories of old Havana, Cuba with his creation of colonial architecture humidor, while he looks toward the future on socio-cultural development of Cuban made humidor craftsmanship. 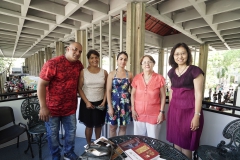